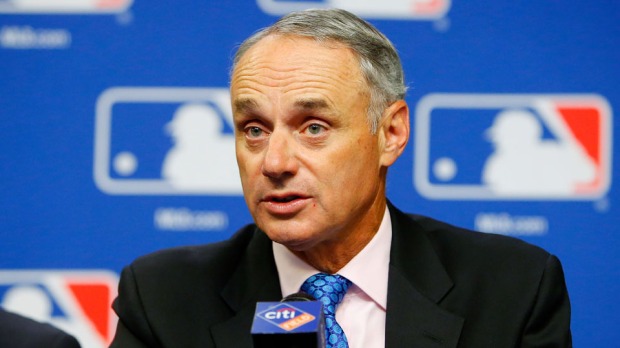 We the Fans, by Ian Joffe

“Baseball is a game between two teams of nine players each, under direction of a manager, played on an enclosed field in accordance with these rules, under jurisdiction of one or more umpires.”

The above is rule 1.01 of Baseball, the first rule in the official rule book. It is what parents turn to to teach their 4-year-old and what umpires turn to on the first day of school. Rules have, of course, always been essential to baseball, as they are to our society as a whole. But, it has come to my attention, and the attention of the baseball community, that now 3-year Commissioner Rob Manfred intends to impose, or at least try to impose, a set of new rules to speed up the game, many of which are, in my estimation, are highly unpopular. Slightly less controversial is that starting in 2017, the intentional walk will be a sign from the dugout, rather than four pitches. Still, far more drastic changes seem to be in the works. Manfred wants to, perhaps as soon as 2018, institute rules such as a 20-second pitch clock and the placing of two runner on base at the start of each extra-inning frame.

To question the rules of Rob Manfred, one must first look at the purpose of a rule in the first place. While the philosophy is likely lengthy yet interestingly debatable, one can generally say that rules exist for the net benefit of those who follow them. As children, we were taught not to cut in line, because the line helps everyone get what they are waiting for. We were taught to raise our hands, because only then will everyone’s question get answered. Rules in the game of Baseball work similarly, but its business aspect makes it slightly more complex. Like how a normal business must keep its shareholders happy, Major League Baseball must keep its fans happy. So, rules in Baseball exist to help everyone: the participants (owners and players alike) and the fans.

Through this definition, Manfred’s rules get sketchy. It may sound weird coming from someone who is currently writing a blog post, but the truth is that my sole opinion barely matters. What matters is the opinions of those who the rules affect: the participants of baseball and their fans. The rules must exist to help those people. From a fan’s perspective, the questions are relatively binary: will this rule make me like Baseball more, or less? Will it make me watch Baseball more or less? To me, Manfred’s rule makes me like the game less, and therefore makes we watch it less. But, as I just said, the opinion of the majority matters more than just what I think, and the vast majority of people I have talked to agree with me. In fact, very few people I have spoken to like the pitch clock, and literally nobody I have spoken to, including online commenters (whose opinions matter too, believe it or not), supports putting runners on base at the dawn of extra innings. Additionally, the Player’s Union has come out strongly against these changes. Based on my experience, it is crystal clear that the potential new rules are disliked by most people, despite the fact that the very purpose of the Baseball rules are to make people like the game more. These rules do not serve their purpose, in fact they do the opposite of their purpose, so why should they exist?

But, like my own opinion, my own experience does not matter much either. In other posts, I rant about the importance of sample size. What Commissioner Manfred needs is to get out and talk to people (or at least pay people to do that for him). Run some polls! Post some surveys! Figure out what we, the fans really truly want. This is not a blog post about specific potential rule changes that could affect us two years from now (well, it sort of is, but that’s not the point). This is a post about how the Commissioner of Major League Baseball needs to learn what his fans really want. As a 16-year-old teenager, I am tired of having people assume my opinion (and I’m sure many other groups can relate). People think us teens are impatient and irrational. But, the truth is, we just love Baseball. I hear on TV that MLB needs to speed up the game to “attract young fans.” The problem is, the majority of us young fans do not want the commissioner to speed up the game at all. And, the only way New York will know for sure is by getting out and polling us. Manfred must not assume what we want, rather he must see what we actually want. If it turns out I’m wrong and the fans want a faster game, so be it. As of now though, that appears to be the opposite case. Mr. Manfred: keep the game slow, keep the fans happy. Or at least figure out what will actually keep the polled majority of fans happy, instead of what you think will make the fans happy.

For more useless rants, follow us  on Twitter and Instagram. Check out some more great content too. We have plenty for the stathead (like myself), such as a piece on the ultimate lineup order or breakout star Daniel Murphy. If you like interviews, here’s one with the Angel’s #2 propect.  If you like a little bit of the facts and a little bit of those opinions, here’s a far outdated but still interesting debate. Thanks!