A New World of Baseball

A Look at the Managerial Hires for the 2018 Season

The year is 2018, fifteen years after Moneyball came and turned the once “radical” idea of sabermetrics into something that is normal in the world of baseball today. Sabermetrics is now a pre-programmed feature in all young baseball executives.  There are only a few teams left that are sticking to the stats of the dinosaurs. So as the executives go saber, they need the managers to follow suit. Sometimes when a new or old general manager goes saber he realizes that the manager in place is indeed a fossil that must be excavated and put into a museum. When looking for new managers to take the wheel, GM’s want someone younger and more analytical.

This offseason we saw the Red Sox, Yankees, Nationals, Phillies, Mets, and Tigers change their managers to younger and more modern-day guys. This is the new trend after we saw the success of Dave Roberts in his first two seasons as manager of the Dodgers, taking the place of Don Mattingly. Mattingly is eleven years older than Roberts, which may have been the reason why he wasn’t as in tune with the Dodgers’ saber-driven front office run by Andrew Friedman and Farhan Zaidi.

So are the 2018 front offices ageist? Well the numbers suggest they are, but teams want to win and going saber is the way to do it nowadays, so it’s the best thing for the fans.

The outgoing managers of the six clubs changing guards this year have an average age of 59.6.

The incoming managers of these six teams have an average age of 47.1.

That is a 12 1/2 year difference in age. That shows you that it does take a younger guy to believe in sabermetrics as much as the GM’s do. However, this is just the beginning; I believe that more and more teams will follow the Dave Roberts mold in the future. 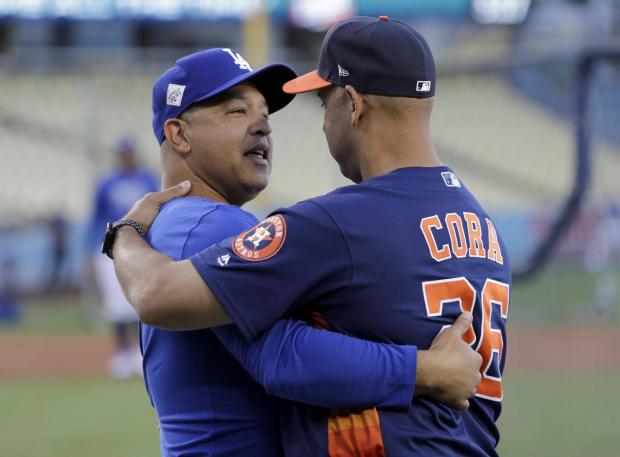 Now if you look at the six clubs who are replacing managers, something surprising shows up. Okay, not when you look at the Mets, Phillies, and Tigers because they were all losing teams in 2017, but when you see names like the Red Sox, Yankees, and Nationals, you are taken aback since they all made postseason runs in 2017. Plus Joe Girardi exceeded expectations last year when his “rebuilding” team went one game away from going to the World Series. Let’s take a look at the six new managers and how each franchise parted ways with their 2017 manager.

Aaron Boone (44 years old) is getting the gig as the Yankees parted ways with Joe Girardi (53 years old) following the 2017 season.  After ten seasons of being the manager of the Yankees, GM Brian Cashman wanted a new guy to have the Yankees’ young core of guys to build around. Boone comes from a family lineage of talented ball players and has recently been an analyst on TV for ESPN. His enjoyment and knowledge of the game ultimately differentiated him from the rest of the contenders.

Alex Cora (42 years old) becomes skipper of the Boston Red Sox as a result of the firing of John Farrell (55 years old). Farrell didn’t maximize potential of the young powerful Red Sox, which led to the organization wanting to get some fresh blood in. Cora stood out to the Red Sox’s front office after being a successful bench coach of the 2017 World Series winner Houston Astros. Like Boone, he is filled with passion for the game and was also a commentator on TV.

Dave Martinez (53 years old) takes over for Dusty Baker (68 years old) after his unexpected firing due to another disappointing season with the star-studded Nationals. Martinez is getting his first manager job after being the righthand man for Joe Maddon on the Rays and then winning it all with him in Chicago in 2016. He brings experience and the tools of a World Series winning team which the Nationals have yet to ever do.

Gabe Kapler (42 years old) becomes “Kaptian” of the Phillies after Pete Mackanin (66 years old) is moved to a desk job in result of the Phillies’ rebuild turning the corner faster than expected. Mackanin was never given the chance with a good team for a full season, but pulled together an above .500 team after the All-Star break last season with the emergence of Rhys Hoskins. But GM Matt Klentak wanted to choose his own manager to begin the years to come and make sure that Kapler got experience before their golden years began. Kapler stood out with his success as head of player development for the Dodgers, creating young stars like Corey Seager and Cody Bellinger. His confidence and energy ended up getting him the job, even though people opposed his Mens Fitness Blog. So far the young players have loved his personality and they say he never has a negative thing to say.

Mickey Callaway (42 years old)  becomes the successor of Terry Collins (68 years old) after Collins’ six-year run. Callaway makes a lot of sense for the Mets because their young group of guys need some more positive motivation. Also Callaway can bring his success from the Cleveland Indians where he served as the pitching coach. The biggest upside for the Mets is their pitching, but they have an issue with staying healthy which he can help with despite the bad luck that the Mets’ pitching staff has had recently.

Ron Gardenhire (60 years old) replaces the four-year Tigers manager Brad Ausmus (48 years old) who posted a .486 winning percentage in his four seasons. This is a total opposite of the other five teams because he is actually twelve years older than Ausmus. Despite this, Gardenhire brings a Manager of the Year Award and a World Series championship experience when he was a coach for the Twins. His only job is to win a few games as they begin their rebuild.

As baseball is changing managers, teams are also adopting new theories and blueprints, the most recent being tanking. It will be interesting to see how these six managers will use analytics in the upcoming years and see which teams will follow the Dave Roberts mold next offseason! This is the Big Bang 2.0 and dinosaurs are becoming extinct, so join me in looking towards the future and get educated in sabermetrics, because I used to be a dinosaur and I had to adapt.