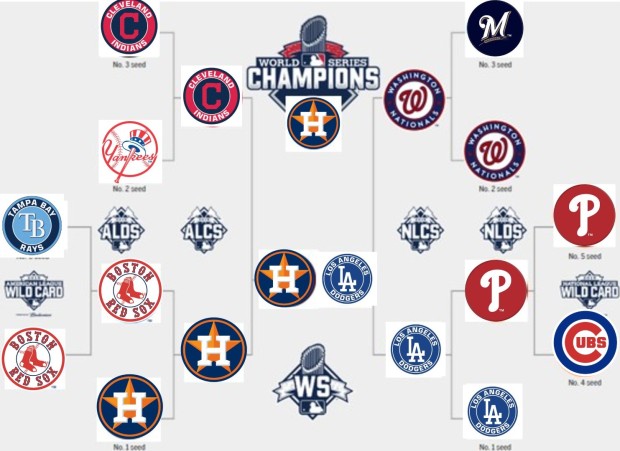 For the most part, the American League was easier to try to predict than the National. The Astros and Indians should each win their divisions easily. Boston and New York will have a tough fight, but I really like the Yankees’ Paxton acquisition and given a bounceback by Sanchez and full season out of Judge, I think they have the upper hand. That rounds out the four AL superpowers, leaving no other clear option. I chose the Rays to the take the final spot because of my love of bullpenning, and continued belief that the strategy remains underrated. It could legitimately shave 100 runs off the pitching staff, and will make up for a less-than-spectacular offense. The Red Sox, however, will easily defeat Tampa in the wild card game, and move on to face Houston, who will out-pitch Boston to the championship series. Meanwhile, the Indians and Yankees will get locked in a 5-game series that New York just barely edges out. While the Yankees may continue to display strength in the CS, they are still defeated by the Astros, who return the World Series for the second time in three years.

The easiest division in the senior circuit to predict was the West. The Dodgers are one of the deepest teams I have seen, as assets like Max Muncy, Joc Pederson, and several pitchers continue to get underrated. While others have had trouble predicting the NL East, I think the Nationals will run away with it. It’s true that there are four teams that may contend to make the playoffs, but the Nationals have both the best hitting (even without Harper), and by far the best pitching (Scherzer, Strasburg, and the underrated Corbin could make a historic group). Early season injuries appear to be a potential issue, but I still expect a strong bullpen and better-than-Chicago offense to carry the Brewers to a division title over the Cubs, although neither team will win too many games. The Cubs pick up the first wild card spot, and are met by the Phillies, who out-pitch the Braves and out-hit the Mets. While I have the Cubs over the Phillies for the regular season, the Cubs lack a strong ace, and will be defeated by Nola in the wild card game. But, the Dodgers make quick work of the Phillies in the next series. The Nationals will also rather easily bring down the Brewers’ weak rotation to move past the DS (yes, I know I say this every year and yes, I know the Nationals never actually succeed). While Washington does give L.A. a run for their money, the Dodgers’ depth ultimately leads to D.C.’s defeat in the Championship Series, leading Los Angeles back to the World Series for the third time in a row.

Justin Verlander outduels Clayton Kershaw to win game one of the 2017 rematch World Series, as does Gerrit Cole to Walker Beuhler in game two. The Dodgers, however, pull through to win games three and four, tying the series at two-a-piece. The two teams split games five and six, leading to a rubber match (sounds familiar?), but Houston’s bullpen outlasts the tragic Dodgers’ once again in game seven, as the Astros become World Series champions for the second time in three years, and the Dodgers are handed yet another loss, in a kind of cruel Shakespearean/Sisyphusian crossover.

The American league has a clear top three. Mike Trout, Mookie Betts, and Jose Ramirez all put up WAR’s over 8.0 last season, and should repeat similar feats again in 2019. Trout is the best of the three, and will be making a handsome sum of money for the next 12 years because of it. The NL is much less top-heavy in both teams and individual players. I ended up going for Harper as MVP, mostly because I couldn’t find anyone who I think is better. Goldschmidt, a similar player, will finish second place with power, some steals, and a high OBP for St. Louis. I expect a lot of regression out of Christian Yelich, who had unsustainable BABIP, HR, and fly ball numbers in 2019, but I sneaked him in at third out of the probability that he does not regress as expected. 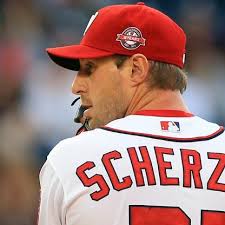 Another recent extendee, Chris Sale, will win the AL Cy Young award with an incredibly strong K/BB ratio. Verlander has been extremely consistent and just had his best season yet at 36 years old. Bauer’s ceiling narrowly brings him ahead of Verlander’s teammate Gerrit Cole for the third place spot, and his FIP from last season suggests a mid-two ERA could be coming once again. In the NL, Max Scherzer is a safe pick to carry the award after turning in his fourth straight season with an ERA under 3.00. Jacob DeGrom was incredible last year, and while some regression is expected, he will still be stellar after regressed numbers. Finally, the best pitcher of this generation, Clayton Kershaw, will win third place in voting, and that could go up if he can stay healthy.

I went with the easy pick for AL Rookie of the Year, and while I don’t guarantee Vlad’s success like many optimists are trying to do, he certainly has the best chance at it. If he gets brought up early enough, Rogers also has a chance to be an elite hitter, especially in

Colorado. Cash and Counsell are similar in their masterful bullpen use, and that, in addition to the lineup manipulation both will need to make the playoffs, earns the two managers awards. Gary Sanchez is the best catcher in baseball, and will rebound to prove so this season after lucking into a dismal 2018 BABIP, and Josh Donaldson will also return to old form with his power and walks. Finally, I chose two pitchers: Bieber and Pivetta, to take out breakout player honors. They put up 3.42 and 3.30 xFIP’s in 2018, respectively, and should move towards those numbers, maybe even with improvement from experience, in the coming season.

This is my favorite part of the annual predictions column. I won’t be right on all or most of these, but I think all of them have a real chance at happening, and with each I’m trying to make a statement about a team or player.

If you liked this article, please follow The K Zone on Twitter and be the first to know when more original research, opinion, and interviews, come out!