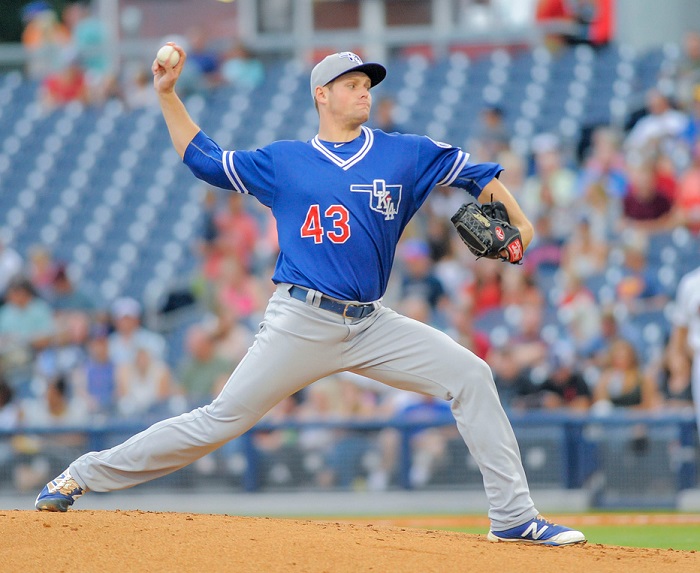 In 2016 Trevor Oaks had arguably his best season, where he never pitched less than five innings in a game, he had three 8 inning games, one complete game shutout with 11 strikeouts and 3-Hits. He is also ranked in MLB Pipeline’s top 30 dodger prospects this year! His talent and respect are something to lookout for in the years to come! Hope you enjoy my interview with Dodger Prospect Trevor Oaks.

Mike Duffy: Going 14-3 this year what worked so well with your delivery of your pitches?

Trevor Oaks: A lot of my success this year had to do with sticking to what I do well. A lot of baseball trends are starting to go towards high velocity and nasty strikeout stuff. While that’s definitely valuable and helpful, (stuff that I want too) I just tried to go out there and get quick ground balls using my sinker/cutter combo. If I can get my team in a position to win after 6 innings, I’ve done my job. But my separator is how efficient I can be and how many innings can I accumulate in the season

Mike Duffy: As a pitcher in a dominant rookie pitcher organization how hard is it to fight for an everyday spot to start?

Trevor Oaks: It’s definitely challenging to not think about at times- Looking back at this past season, I was just trying to focus on each start, each pitch at a time. I can’t worry about what other guys are doing. I’m gonna go out there and compete and do my best. Obviously I’d love to play for the Dodgers and contribute to their success someday, but I also understand there’s 29 other teams that may need a starter that can go 6-7 innings. I’m that guy and I want to do that for a club next season

Mike Duffy: What is your number one goal your going to focus on in the offseason?

Trevor Oaks: This offseason I’m primarily focusing on improving my stuff. I want a better, more consistent change up. I’m also thinking about adding a splitter so I can try to get that strikeout pitch. But ultimately I want to fine tune my command. I can throw a lot of strikes and I keep it down for the most part. But I really want to put the ball where I want and consistently keep the ball at the shins or below.

Trevor Oaks: I love messing around on the piano and I love spending time with people I care about. I’ve been volunteering at CBU (California Baptist University)  as a pitching coach, so it’s awesome to have the opportunity to invest into younger guys and help them develop and improve in order to fulfill their dreams. It’s still baseball, but I look at it as using what I can to help other people. That’s my hobby! 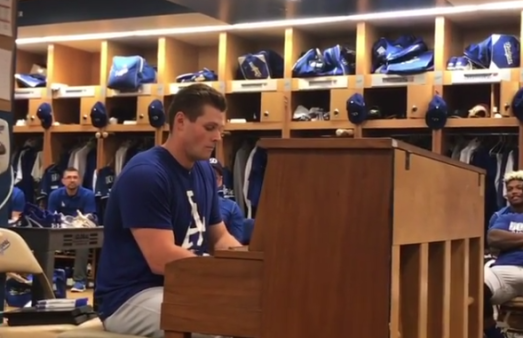 Mike Duffy: Besides your hard work who else do you dedicate your success to?

Trevor Oaks: God deserves all the credit. My career and success all go to him and he directs my path. He has put a lot of great mentors in my life to guide me and help me along the way. From a mental standpoint, my college coach, Gary Adcock, instilled a lot of good mindsets and philosophies that I have changed my whole career. My grandpa, Ade Moss, is also another mentor that continually helps me in all aspects of my life. And of course my parents. They have always done their best and supported me!

Mike Duffy: Which batter has been the biggest challenge for you?

Trevor Oaks: Danny Volgebach had my number pretty good. But you could say that for just about everyone on our pitching staff. That guy absolutely rakes. I had a tough time with the rangers affiliates. They seem to like big lefties, and if my changeup isn’t on that day, I have a tough time throwing to Joey Gallo and guys like that

Mike Duffy: Is there anyone in the Majors right now who comes to mind when you think of being supportive of you?

Trevor Oaks: I haven’t gotten a ton of opportunities to talk to a lot of big league guys. But Brock Stewart has been a good friend since we got drafted together in 14. Ross Stripling is another great friend and teammate. He’s helped me out a lot and accepted me when I was adjusting to the new environment. Howie Kendrick talked to me when he was rehabbing in Rancho. Super nice guy and had a lot of good baseball knowledge. You definitely try to pick at their brains and try to soak up anything you can.

Mike Duffy: Who is the biggest leader on your team?

Trevor Oaks: Biggest Leader for me was Charlie Culberson. He had an interesting leadership style. He isn’t afraid of talking and saying what he thinks. But he normally chose to lead by example. He just plays the game the way it should be played. Very professional and personable guy. He was kind and accepting of everyone, and genuinely cared for his teammates. Can’t say good enough things about the guy! 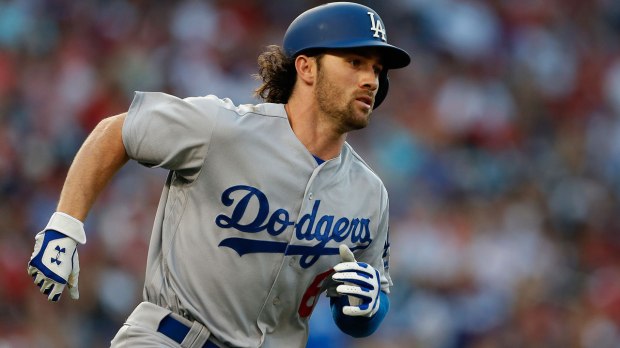 Mike Duffy: What changed in Puig’s attitude when you were down in OKC that made him perform better?

Trevor Oaks: I was very observant of Puig. The media always portrays people and puts different spins on situations. I wanted to see what he was really like. I found Puig to be a very passionate player and enjoyable to be around. There were some ways where he was still maturing and adjusting to American Baseball, but I thought he handled that situation very well. He worked hard, went in the cage early before most of the guys got to the field, and hit a ton of balls in the cage. He worked hard and I was very impressed by the way he handled the situation. The fans were brutal to him, and maybe some of that he brought on himself. But you gotta give the guy some credit for manning up and making the changes he needed to. 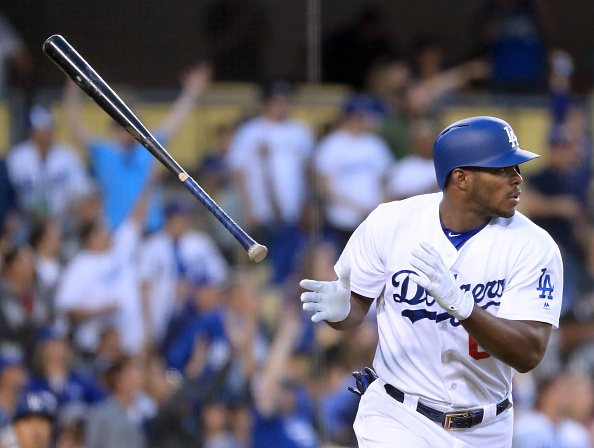 Mike Duffy: Do you consider yourself a leader on and off the field?

Trevor Oaks: I want to be a leader and I think I have the capacity to do that. But I think at this point in my career, I’m in a position of learning and following the examples of other guys who have been playing for a while. My role is to be a sponge and soak up as much as I can while I’m here and have great teammates to learn from.

Mike Duffy: What is your number one goal for the team in the second half of the season?

Trevor Oaks: I think our primary goal is to contribute to the big league team and help them win a World Series. Our secondary goal is to get in the playoffs and win a PCL championship.

Mike Duffy: Who was your favorite player?

Trevor Oaks: I didn’t really have a favorite player growing up. I always liked watching Kershaw when he was just coming on to the scene. 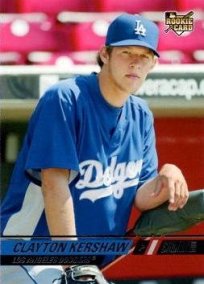 Trevor Oaks: My favorite baseball memory would be winning the Cal League championship, or this year when I hit a home run and threw 7 innings against the Baby Cakes.

Trevor Oaks: My favorite Stadium I’ve played in the Minors would be either the Dayton Dragons or in Tulsa. Good atmosphere, great playing surface!

Mike Duffy: Growing up what team was your favorite?

Trevor Oaks: My favorite team was a toss up between the Angels and the Dodgers. I would always watch Angel games because the stadium was closer to my house. But I started liking the Dodgers when I was 12 and it was a dream come true to be drafted by them. 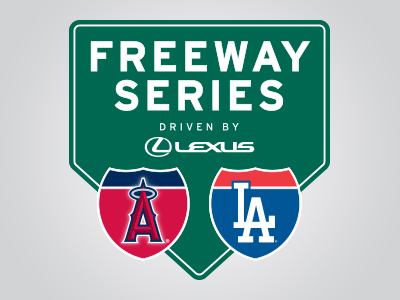 Mike Duffy: What are your favorite movies and tv shows?

Trevor Oaks: My favorite movie is tough! I’d say Gladiator or Braveheart. Favorite TV show is between Game of Thrones and The Office.

Mike Duffy: When did you know you wanted to be a professional ball

Trevor Oaks: When I was playing ball at Biola University, I was starting to get some interest from scouts. I wouldn’t allow myself to seriously consider it until I knew there was a chance.

Mike Duffy: What’s your favorite part of the Dodgers organization?

Trevor Oaks: My favorite part of the Dodgers organization is their coaching staff. They have done such a good job of placing good people in coaching positions. It’s been a blessing to get to know all the staff, top to bottom. It really shows that they care about developing good players and people!

Mike Duffy What did you think about the World Series game?

Trevor Oaks: One of the best World Series I’ve seen! Congrats to the Cubs organization! Lots of hard work goes into that. It’s a long season and I tip my cap to those guys. Hopefully the Dodgers can do that next season!

Mike Duffy: Thank you for doing this!  Maybe some day I’ll interview you in person when your pitching for the Dodgers on the big stage! Thanks again and have a great night!